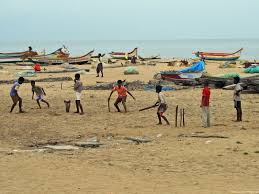 In India, Tendulkar is treated like God and has been recently nominated to the upper house of parliament (Rajya Sabha) to participate in the process of making rules for the country. Fans all over the country go crazy at the mere sight of this man. The man has become a billionaire just by playing cricket very well.

Let’s analyse his capabilities which make him an extraordinary man. He can hit a piece of leather thrown at him, at whatever speed, farthest all along the ground most of the time and some times hit it far in the air. He does this while ensuring that the piece of leather does not hit three wooden sticks struck in the ground behind him. Millions of people watch him do this insane and meaningless ( no contribution whatsoever towards the progress of humanity) act inside the stadiums or in front of their television sets. This sport of cricket as well as other sports appear meaningless activities, on their own, to some of us. The act of spectators watching these sports, shouting and jumping on their feet while crying themselves hoarse  is also an activity, which in no way can be considered productive. These activities do not promote the welfare of the race which prides itself with lot of sense.

These sports were invented by homo sapiens long time ago when the technology was primitive and needs of humanity were limited.

It is now time for the human race to graduate from meaningless sports to sports which are productive while being entertaining also. Now technology is available which can help us in this endeavor. The sports could be used to help save our planet and to solve the many problems facing the human race. The human race is facing problem of shortage of clean energy and of disposal of huge quantity of waste.

So, let us start playing games which help us to solve these problems while also entertaining us. In cycling, a person riding the bicycle fastest should not be the winner but the one who generates most amount of electricity in a given amount of time. Running in stadium could be replaced by running on a treadmill connected to a generator. Similarly, mostly the sports should basically focus on converting muscle energy to electrical energy. We can also have sports in which a team making the most out of waste wins.

The spectators activity in a stadium should also be so channelized and used that it helps in generating electricity.

So let’s have fun good and health while contributing to the overall health of our planet also.